A Different Approach to Chiropractic Care

There are many approaches a chiropractor can take to removing interference to your spine and nervous system. Here at Carolina Family Spine Center, we take a specific, conservative approach that involves no twisting, popping, or cracking. This type of adjustment is safe, gentle, and effective for spines of all ages and is designed to be a comfortable experience without any surprises.

We provide spinal correction and chiropractic adjustments utilizing "state of the art" chiropractic techniques. Never in the history of chiropractic care have chiropractors been able to provide the level of help and expertise that is available today. Many of the newest chiropractic techniques are actually safer, more comfortable and more effective than ever before. As a chiropractor who cares about utilizing the most advanced chiropractic techniques, Dr. Paige is certified in Chiropractic Orthospinology, a technique that focuses on aligning the top bone in your neck to remove pressure on your brainstem, and Webster Technique, a technique designed originally for pregnant woment to help alleviate stress on the pelvis from spinal misalignments and nervous system interference. She is also trained in various techniques such as Thompson, Gonstead, and Toggle for adults, and Logan basic and SOT for the pediatric spine. Everyone's spine has been through unique stresses and injuries and presents differently. Training with different techniques allows for Dr. Paige to develop a chiropractic care plan that is just right for you.

"Chiropractic care benefits all aspects of your body's ability to be healthy. This is accomplished by working with the nervous system--the communication system between your brain and body. Doctors of Chiropractic work to correct spinal, pelvic and cranial misalignments (subluxations). When misaligned, these structures create an imbalance in surrounding muscles and ligaments. Additionally, the resulting nerve system stress may affect the body's ability to function optimally.

The Webster technique is a specific chiropractic analysis and diversified adjustment. The goal of the adjustment is to reduce the effects of sacral subluxation/ SI joint dysfunction. In so doing neuro-biomechanical function in the pelvis is improved.

Dr. Larry Webster, founder of the International Chiropractic Pediatric Association discovered this adjustment as a safe means to restore proper pelvic balance and function. This specific sacral analysis can be used on all weight bearing individuals to determine S/I joint dysfunction/ sacral subluxation and is therefore applicable for the entire population. The assessment includes heel flexion to buttocks, with restricted flexion indicating the affected SI joint. Correction is made with a diversified, sacral adjustment. It is used on all weight bearing individuals presenting with this biomechanical restriction. Common symptoms include (but are not limited to) low back pain, sciatic neuralgia, and symptoms associated with sacral subluxation and/ or S/I joint dysfunction.

The ICPA recognizes that in a theoretical and clinical framework of the Webster Technique in the care of pregnant women, sacral subluxation may contribute to difficult labor for the mother (i.e., dystocia). Dystocia is caused by inadequate uterine function, pelvic contraction, and baby mal-presentation.32 The correction of sacral subluxation may have a positive effect on all of these causes of dystocia.

In this clinical and theoretical framework, it is proposed that sacral misalignment may contribute to these three primary causes of dystocia via uterine nerve interference, pelvic misalignment and the tightening and torsion of specific pelvic muscles and ligaments. The resulting tense muscles and ligaments and their aberrant effect on the uterus may prevent the baby from comfortably assuming the best possible position for birth.
In regards to pregnant mothers, Dr. Webster reported that when a mother sought care and her baby was in a breech position, the restoration of pelvic neuro-biomechanics with this adjustment also frequently facilitated optimal fetal positioning. There are cases published in the chiropractic literature that support this theory. More research is needed and is currently underway by the ICPA.

It is therefore considered prudent that this specific sacral analysis and adjustment be used throughout pregnancy to detect and alleviate sacral imbalance and optimize pelvic neuro-biomechanics in the mother. Because of the particular female adaptations from the increase of hormones, weight gain and postural adaptations, pregnant mothers have a greater chance of sacral subluxation and neuro-biomechanical imbalance than the general population. Additionally, because of the effect the chiropractic adjustment has on all body functions by reducing nerve system stress, pregnant mothers may have significant benefit by having their spines checked regularly throughout pregnancy, optimizing health benefits for both the mother and baby." 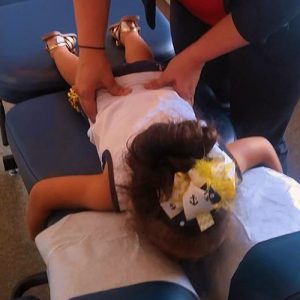